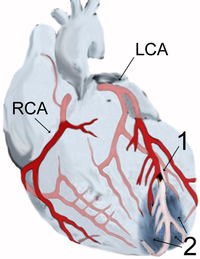 An acute coronary syndrome (ACS) is most commonly caused by rupture or erosion of an atherosclerotic plaque with superimposed thrombus formation. The underlying process is atherosclerosis, a chronic disease in which artery walls thicken by deposition of fatty materials such as cholesterol and inflammatory cells. The accumulation of this material results in the formation of an atherosclerotic plaque, encapsulated by connective tissue, which can narrow the lumen of the arteries significantly and progressively causing symptoms as angina pectoris or lead to an ACS. Depending on the presence of myocardial damage and typical ECG characteristics, ACS can be divided into ST-segment elevation myocardial infarction (STEMI), and non-ST-segment ACS including non-ST-segment elevation MI (NSTEMI) and unstable angina. In the case of STEMI and NSTEMI, there is biochemical evidence of myocardial damage (infarction). [1]

Different terminology is used during different phases of the chest pain workup. The ECG classifies into ST elevtion or not. Troponine definitely classifies into myocardial infarction (damage) or not.

The most typical characteristic of an ACS is acute prolonged chest pain. [2] The pain does not decrease at rest and is only temporarily relieved with nitroglycerin. Frequent accompanying symptoms include a radiating pain to shoulder, arm, back and/or jaw. [3] Shortness of breath can occur, as well as sweating, fainting, nausea and vomiting, so called vegetative symptoms. Some patients including elderly and diabetics may present with aspecific symptoms. [4], [5]

It is important to complete the medical history (prior history of ischemic events or vascular disease), risk factors for cardiovascular disease (a.o. diabetes mellitus, current smoking, hypertension, hyperlipidemia) and family history (first degree relatives with myocardial infarction before the age 55 of (males) or 65 (females) and/or sudden cardiac death). [6]

Symptoms of heart failure such as orthopnea (dyspnoea when lying flat), progressive dyspnoea and peripheral oedema are indicative of the extent of the problem. [7]

The focus of the physical examination should be to recognize signs of systemic hypoperfusion such as hypotension, tachycardia, impaired cognition, pale and ashen skin. [7]

Furthermore, signs of heart failure are important, such as pulmonary crackles during auscultation and pitting oedema of the ankles.

An electrocardiogram (ECG) should be made on arrival in every patient with suspected ACS. [7]

The ECG is an important and easy modality which can assist in the diagnosis and prognostication of ACS. However, a single ECG may not reflect the dynamic pathophysiology of the ACS. Therefore it is important to make serial ECGs, certainly if a patient has ongoing symptoms. [7]

Furthermore, the ECG is also helpful in localising the ischemia:

Cardiac markers are essential in order to confirm the diagnosis of MI, indicated by elevated Creatine Kinase isoenzyme MB (CK MB) and/or (high-sensitive) troponins. Troponins are more specific and sensitive than CK MB. The cardiac troponin concentration begins to rise around 4 hours after the onset of myocardial cell damage.[8]

With high-sensitive troponins, myocardial cell damage can be detected even earlier. It can take 4-6 hours before the CK MB concentration is elevated. Serial measurements are useful in order to estimate infarct size and increase the sensitivity of the (older) assays. [9]

A pitfall concerning mildly elevated cardiac markers can be patients with renal failure or pulmonary embolism. [10]

As the formation of an intracoronary thrombus is a central mechanism in ACS and (recurrent) subsequent outcomes, the cornerstone in the treatment of ACS is antithrombotic treatment. All patients diagnosed with ACS should start with aspirin and a P2Y12 receptor blocker (clopidogrel, prasugrel or ticagrelor). [11] Aspirin and the P2Y12 receptor blocker are both platelet aggregation inhibitors. The treatment of ACS also focuses on medication to reduce the workload of the heart. ß blockers lower heart rate and blood pressure, to decrease the oxygen demand of the heart. [12] Nitrates dilatate the coronary arteries. [13]

Depending on the (working) diagnosis STEMI or NSTE-ACS, the revascularisation strategy varies.

Initial treatment of STEMI is relief of ischemic pain, stabilisation of hemodynamic status and restoration of coronary flow and myocardial tissue perfusion. Reperfusion therapy should be initiated as quickly as possible by preferably primary percutaneous coronary intervention (PCI) or fibrinolysis. Reperfusion is beneficial up to 12 hours after the onset of symptoms. In case of severe hemodynamic compromise, reperfusion therapy may be attempted up to 24 hours after symptom onset. Meanwhile other measures as continuous ECG monitoring, oxygen supply and intravenous access are indicated. [7]

Primary PCI is the preferred revascularisation method for patients with STEMI. It is an effective method of securing and maintaining coronary patency and avoids the higher bleeding risk associated with fibrinolysis. If a patient is referred to a non-PCI-capable hospital, and transfer to a PCI-capable hospital in order to perform PCI within 2 hours after the onset of symptoms is not possible, fibrinolytic therapy is recommended.

There are circumstances in which transfer to a PCI qualified hospital is recommended:

Available data support the pre-hospital initiation of fibrinolytics if this reperfusion strategy is indicated. Fibrinolytics like streptokinase and rtPA stimulate the conversion of plasminogen to plasmin. Plasmin degrades fibrin which is an important constituent of the thrombus. Fibrinolytics are most effective the first hours after the onset of symptoms, and a benefit is observed in terms of reducing mortality within the first twelve hours. [17] The hazards of thrombolysis are increased bleeding risk, including hemorrhagic strokes. Because re occlusion after fibrinolysis is possible patients should be transferred if possible to a PCI qualified hospital once fibrinolysis is done. [18]

In rare cases, CABG is indicated, such as failed fibrinolysis with coronary anatomy unsuited for PCI and/or failed PCI, when the patient develops cardiogenic shock, life threatening ventricular arrhythmias, has three vessel disease, or mechanical complications of the MI. [19]

Comparable to STEMI, revascularization in NSTE-ACS relieves symptoms, shortens hospital stay, and improves prognosis. However, NSTE-ACS patients represent a heterogenous population, and indication and timing of revascularization depend on many factors, including the baseline risk of the patient. According to current guidelines, depending on early risk stratification a choice has to be made between a routine invasive or a selective invasive (or “conservative strategy”) [20]

Early risk stratification is helpful to identify patients at high risk who might benefit the most from a more aggressive therapeutic approach in order to prevent further ischemic events. [21]

Early risk stratification can be performed using one of the validated risk scores, such as the GRACE risk score. GRACE calculates the probability of death while in hospital. The following characteristics are taken into account:

Regarding treatment strategies in NSTE-ACS, many randomized controlled trials (RCTs) and meta-analyses have assessed the effects of a routine invasive vs. conservative or selective invasive approach in the short and long term. Recent meta-analyse suggest a benefit of the routine invasive management that is mainly visible in intermediate- to high-risk patients. (referentie)

Patients undergoing a selective invasive (“or conservative”) management are initially stabilized by medication only, including aspirin and clopidogrel orally and nitro-glycerin, heparin and a beta blocker intravenously. If the patients is unstable or has refractory angina, he/she is referred for coronary angiography. Patients stabilized on medical therapy should undergo a stress test before discharge. Potential advantages of this treatment strategy are a reduction of the number of catherization procedures. A potential disadvantage is a prolonged stay in the hospital. Although meta-analyses suggest the superiority of a routine invasive management, trials in which the selective invasive strategy was characterized by high rates of revascularization show equivalence of the two strategies.

The routine invasive strategy consists of routine, early coronary angiography within 24 hours after admission and subsequent revascularization if appropriate by PCI or CABG based on the angiographic findings. The optimal timing of coronary angiography with an intended routine invasive management is debated. In patients with high risk features, including hypotension, ventricular arrhythmias or a large myocardial area at risk, should undergo urgent angiography (<2 hours).