Difference between revisions of "CPVT"

Catecholaminergic Polymorphic Ventricular Tachycardia (CPVT) refers to a hereditary disease that is associated with exercise (or adrenergic) induced ventricular arrhythmias and/or cardiac syncope and carries an increased risk of sudden cardiac death.

The clinical diagnosis of CPVT is confirmed in an individual with polymorphic VT reproducibly induced during exercise tests, isoproterenol infusion or emotion and exercise.

Patients present themselves most often with syncope or even an out-of-hospital cardiac arrest, usually during the first or second decade of life. The symptoms are always triggered by exercise or emotional stress. A family history of exercise-related syncope, seizure or sudden death is reported in 30% of the patients.

Family members of patients with CPVT who also carry a mutation in a CPVT-associated gene are often asymptomatic.

Patients can present with symptoms of arrhythmias during exercise: 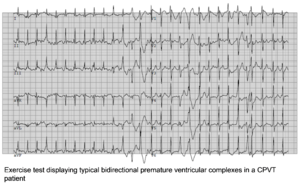 The resting ECG in CPVT is normal. However, there is a progressive ventricular ectopy as heart rate increases during exercise or isoproterenol infusion. Both the frequency and the complexity of the ventricular ectopy increase with the work load. It generally starts with monomorphic premature ventricular complexes (PVCs) and is followed bigemini and subsequently more complex arrhythmias, including doublets triplets, bidirectional ventricular tachycardia to polymorphic ventricular tachycardia. Most of the times, the arrhythmia is self-limiting. However, in some patients, especially if exercise is continued, repeated polymorphic VTs can deteriorate in ventricular fibrillation and sudden cardiac death. 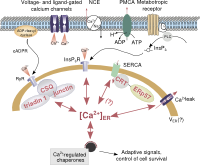 CPVT is caused by mutations in genes involved in the calcium homeostasis of cardiac cells. Four disease-causing genes have been identified: the ryanodine[5] receptor 2 gene (RyR2) (60%), the cardiac calsequestrin 2 gene (CASQ2) (1-2%), the calmodulin gene (CALM1) (<1%) and the TRDM gene (<1%). Mutant RyR2 channels have a gain-of-function effect, resulting in excessive calcium release during sympathetic activation. Mutant CASQ2 causes loss of buffering capacity for calcium of the sarcoplasmatic reticulum. The mutations cause excessive calcium in the myocyte cytosol generating depolarizing membrane currents, which in turn lead to delayed afterdepolarizations and cardiac arrhythmias.

Risk stratification and treatment is best provided by an expert cardio-genetics cardiologist.