Difference between revisions of "Infective Endocarditis"

Infective endocarditis (IE) is an infectious and inflammatory process of endothelial lining of the heart structures and valves. It is most commonly caused by bacterial and fungal infections, although non-infective causes of endocarditis occur, this chapter will concentrate on infective causes.

The global incidence of endocarditis varies in literature with a wide range of 3 to 9 cases per 100,000 person years[1]. Although it appears that in the elderly population the incidence rate is remarkably higher reaching 20.4 cases per 100,000 person years[2]. This is likely related to increased hospitalization, valve replacement surgeries and intra-cardiac instrumentation in the elderly population. In addition to aging, the prevalence of chronic diseases predisposing to bacteremias such as human immunodeficiency syndrome, end-stage renal disease, organ transplantations and diabetes have also increased. IE is a dreaded complication of intravenous drug use, most commonly affecting the tricuspid valve, with a yearly incidence of 1-5% among chronic users[3]. IE related to implantable rhythm devices remains relatively low but is on the rise due to increased patient population requiring rhythm devices[4]. 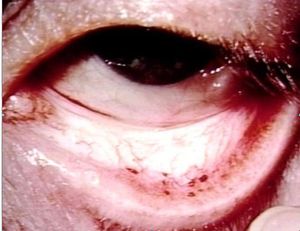 Septic emboli to the conjunctiva

Generally, endothelial damage to heart valves predisposes to bacterial infections as it is generally resistant to bacterial infections. This may be caused by turbulent blood flow in damaged valves, septal defects or instrumentation. Although, recent evidence suggests that A-type von Willebrand factor may contribute to S. aureus binding in endothelial intact valves[5]. Specifically, in patients with S. aureus bacteremia, native valve endocarditis was reported to be in 19% of patients, and 38% in those with prosthetic valves[6].

While many microorganisms have been implicated in endocarditis syndromes, few infectious bacteria account for the majority of cases.

Staphylococcal endocarditis is most commonly caused by S.aureus. It is the most lethal organism implicated in endocarditis with mortality rates approaching 37%[7]. S.aureus is a highly virulent organism and may cause significant valve destruction, abscess formation, conduction abnormalities and embolization. It often enters the bloodstream from the nares or skin. Patients with left sided involvement often require surgery. In intravenous drug users is the most common cause of IE[8]. Patients who are found to have Staphylococcal bacteremia should undergo echocardiography to rule out endocarditis. The prevalence of endocarditis in patients with S.aureus bacteremia was reported in 19% and 38% in those with native and prosthetic valves respectively[6].

S. epidermidis is an important cause of prosthetic valve endocarditis and is associated with a particularly high incidence of heart failure and valvular abscess formation and a mortality rate of 36%[9].

Viridans group streptococcus often account for 30% of community acquired native valve endocarditis[10]. They are part of the oral cavity flora and may gain entry into the bloodstream via dental caries or trauma. The virulence is generally low and eradication rates are high.

Streptococcus bovis is part of the lower gastrointestinal and urinary tract and is commonly implicated in underlying colorectal disease if found to be the cause of endocarditis. Patients who are found to have S.bovis endocarditis should undergo a colonoscopy to exclude colorectal malignancy or polyps.

Several diagnostic criteria have been proposed for the diagnosis of IE. In clinical practice, it is the global clinical picture that leads to decision making in the diagnosis and treatment of endocarditis. The modified DUKE criteria for diagnosis is often widely used, with a sensitivity and specificity approaching ~80%.[13] The DUKE criteria divides into Definite IE, Possible IE, or Rejected IE. It uses Major criteria (microbiology, valvular abnormalities) and Minor criteria (systemic symptoms described below). Using the diagnostic criteria for IE should not override clinical judgment. 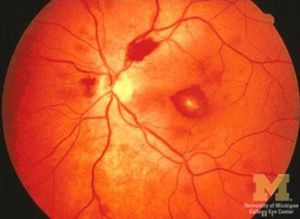 Empiric therapy for infective endocarditis should only be used when there is a high index of suspicion in the absence of positive blood cultures. Three blood cultures should be drawn 30 minutes apart prior to initiating treatment. When there a high clinical probability of infective endocarditis in acute settings, empiric therapy is geared towards MRSA and coagulase negative staphylococcus. In healthcare settings and in injection drug users coverage should also include gram negative bacilli. Options for such therapy include Vancomycin + Gentamicin or, Nafcillin/Oxacillin + Tobramycin/Gentamicin.

As soon as blood cultures become available antibiotics should be adjusted to target the identified microorganisms.

In cases of prosthetic valve endocarditis (PVE), microbiological activity depends on early (<2 months post op) or late (>2 months post op). In early PVE S.aureus accounts for 40% of the cases, followed by coagulase negative staphylococcus (17%). In late PVE coagulase negative staphylococcus accounts for 20% of cases, followed by S. aureus (18%). Coverage for enterococci, streptococci, and gram negative should be considered in empiric therapy in both groups. Rifampin + Vancomycin + Gentamicin should be initiated for PVE <12 post op. Suspected PVE >12 months post op may be treated with the same regimen as for native valves.[16]

The American Heart Association recommendation for specific antimicrobial therapy can be found in their guideline.

The European Society of Cardiology guideline for the treatment of Infective endocarditis.

According the American Heart Association guidelines published in 2007 the following groups of patients are considered to be high-risk and require prophylaxis:[17]

Antibiotic prophylaxis is also recommended for any procedures on infected skin/skin structures or musculoskeletal tissue in high risk patients.[17]

Heart failure occurs in 26-30% of patients with endocarditis.[18][19] It may occur acutely or over time, it is often times due to anatomical disruption from valve vegetations or destruction of nearby tissue. Development of heart failure in the setting of IE is correlated with worse outcomes. Heart failure occurs most commonly with aortic (29%) and mitral valve (20%) infections and less with tricuspid valve (8%).[12] The overall in hospital mortality rate for patients diagnosed with heart failure approaches 30%.[20]

Conduction abnormalities, commonly characterized by heart blocks in endocarditis are associated with infection extension, increased risk of embolization and increased mortality. They are reported to be present in 26%-28% of patients.[21]

Embolization is a dreaded complication of IE and most commonly affects the spleen, brain, kidneys in cases of left sided endocarditis, and the lung in right sided endocarditis. Studies report a rate of 8.5-25% and are associated with significant mortality risk.[22][23] Vegetation length, especially >10mm, infection with S. aureus, S. bovis are predictive factors for a higher rate of embolization and increased in mortality.[24] Embolization to the brain can result in mycotic aneurysms which can present with a variety of neurologic manifestations depending on the anatomic location and spread of infection in the surrounding area. Up to 30% of patients with evidence of embolization to the brain are reported to be asymptomatic.[25]

Prognosis of IE is largely dependent on the patient’s comorbid conditions such as diabetes,[26] hemodialysis, congestive heart failure,[27] complications of endocarditis, prosthetic valve and the microorganism identified. Generally the outcome largely depends on the organism involved. According to recent data it, the over 30 day mortality is ~15% and the 1-year mortality is ~34%.[28] Prosthetic valve endocarditis has a significant in hospital mortality of ~24%,[29] while native valve endocarditis carries a lower in hospital mortality of 12% if treated early and surgically.[30]